For some time now the couple Andrea Petrini and Alexandra Swenden have been shaking the scene of the international gastronomy with their events. It all started at The World’s 50 Best Restaurants awards party. The first in 2013, with topless waitresses. Really dashing.

Their initial proposal of teasing and amusing gave rise to more robust creations with the so-called “Shuffle Gelinaz” – the exchange program for cooks who leave their restaurants to take over another one elsewhere.

Sharing knowledge and pushing the envelope are the name of the game that brings together famous chefs, such as René Redzepi and Massimo Bottura, and others not so much.

On November 10th, 40 chefs from around the world took part in the Shuffle Gelinaz 2. In Brussels, at the same time the Gelinaz Head Quarters (HQ) took place, where 20 other chefs reinterpreted 40 recipes of those who were shuffling, culminating with a dinner of 60 chefs that lasted 24 hours and went around the world.

Manu Buffara (photo), from Manu restaurant, along with Alex Atala, from D.O.M. restaurant, represented Brazil. She went to New York at the Luksus restaurant and presented Curitiba to the world. A first. He went to the Momofuku Seióbo in Sydney, Australia. 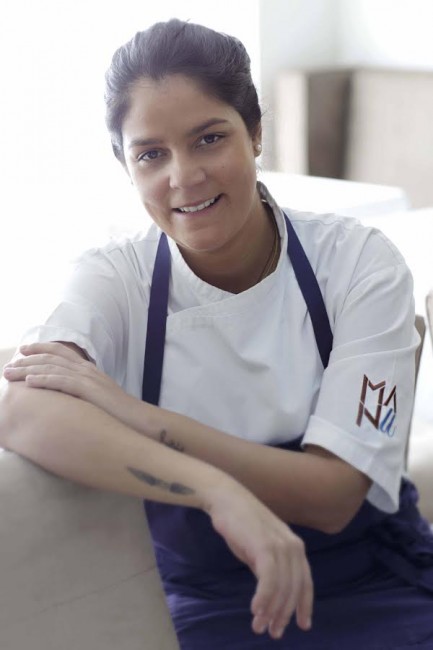 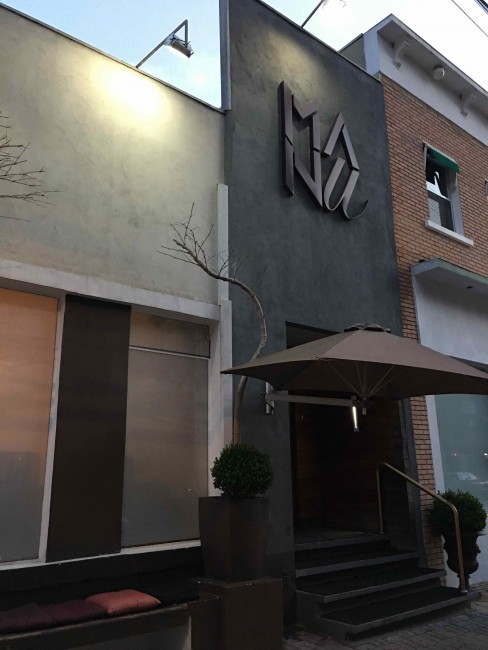 None other than Albert Adrià and Léo Pereira at the HQ presented their version for the cauliflower, chestnut milk and bottarga of the chef from Paraná, a tribute to the restaurant that hosted her.

Each place has an ambassador journalist who meets, next to the restaurant staff, the chef that comes from abroad. Absolute secrecy until the day of revelation is part of the deal. Those who booked dinner could not know who the cook would be.

The one who lived Manu’s life here for six days was Lee Tiernan of the Black Ax Mangal – BAM – restaurant in London. Certainly a stranger to most people here. Certainly a talented, unconventional, provocative cook, but true and intense in following his proposal and values.
Tiernan entered the kitchen by chance, has no academic background in the area, but a lot of experience though. After experiencing food from other countries, he was the chef at Bread & Wine for 10 years, the second address of Fergus Henderson, from St. John, in London. Henderson became famous with the “nose to tail” movement, that is, the use of the whole animal. Tiernan assimilated the concept. When he left Bread & Wine he traveled to “make room for new ideas and seek inspiration”. From then on success came by chance and by the good food, of course. He opened a pop-up in Copenhagen for two months, which had long queues.
The name that sounds like that of a rock band was an inside joke that stuck, so Black Ax Mangal went to London and is doing fine too. It is a small, informal, 22-seater restaurant. On the website, only the address and opening hours, as is common in some new European ventures.

Tiernan could have went the haute cuisine way, with an author’s restaurant. He went the other way though. “Who can afford a meal in the best restaurants in the world?” he says, wanting to provoke reflection, but emphasizing that he respects all options.
His kitchen is influenced by various places – he thought, and still thinks, of opening a kebab-only house. Mangal is the name of the Turkish grill. The chef, who loves falafel, among other dishes, mixes spices and likes to tease with the use of peppers, able to leave Mexicans frightened.

The food at BAM comes in large portions, which are larger on weekends to be split. The presence of traces of the San Francisco Mission Chinese Food restaurant is also well noticeable. He makes a point of speaking. He copy good ideas, “everyone does it,” he states shamelessly.
Anyway, his restaurant is unpretentious and cheap. The future? He only thinks of doing his job, making good food, traveling and maybe, to have another child, he already has three.
The dinner
The mood of suspense set the beginning of dinner, with guests all coming together in the dark and with loud music – the same soundtrack was played in all 40 restaurants.
Behind them a tattooed stranger, wearing the Brazilian football team t-shirt and a cap, his face covered with the make-up of Kiss. He is a fan of the band, Kiss pictures are even at the oven of his restaurant. The mysterious chef was finally revealed. Tiernan used local produce, adapting his recipes, however, he did not rule out his brand with oriental sauces and spices. Unlike what is served at Manu, the dishes were full and intense. Lots of pepper and quality industrial seasonings, with a good dose of creativity, resulted in a different and exotic dinner.

First trip of the chef: to visit the producers of Palmeira. Chef Rosane Radecki, of the restaurants Girassol and Alecrim, hosted us with the special attention as usual. By the way, this has happened in all the other restaurants that the chef has been to.
Yes, he ate “pão no bafo”, a typical dish of the city. He tasted the “purunguinho” cheese, another local dish, and the work of Cláudio Oliver, coordinator of Casa da Videira. At Casa da Videira, he even helped separate ingredients from the local supermarket that would be discarded and saw how the pigs are raised, learning about the rescue work of the Moura breed. One of the pigs from there was served at the dinner he prepared at Manu.
He still had time to make pizza and exchange information with Renê Seifert Jr., from Pão na Casa.  Tiernan also works with natural fermentation. Bread is serious business to him. 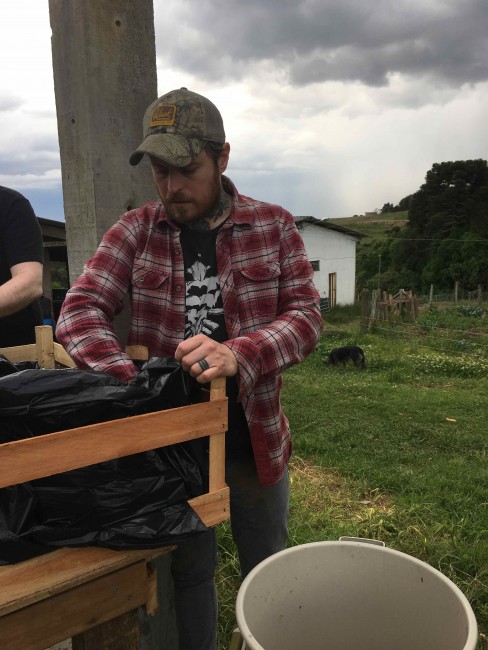 In Curitiba, the chef visited the Curitiba Municipal Market and local fairs. He loved our “pastel”, the açaí that he used in bread – the first dinner plate –, the palm heart, the flour and the mushrooms presented by the expert Francisco Vítola on the barbecue. He left the jabuticaba aside and preferred pitanga and pimenta-biquinho (yellow lantern chili).

Eva dos Santos, from Victor’s Bistro, showed that she understands everything about ember; Tiernan also uses a wood and coal oven in his restaurant. The chef served various house specialties, like seafood, plus oxtail, prime rib and their famous cheesecake.

The farewell lunch was on behalf of our agrobiodiversity ambassador and activist, Gabriela Carvalho, from Quintana restaurant. Tiernan met and took home the honey from native stingless bees, tried the caipirinhas from Baiano, tasted falafel, acarajé and various types of beans, as well as other dishes that the chef serves. In addition to some local chefs, the staff of the Manu restaurant, the family of the chef from Paraná, brewers and producers who helped to welcome Tiernan, the architect/blogger/vegetarian cook Gabrielle Emily Mahamud was a special collaborator. Gabi did a bit of everything, even his makeup and Manu’s staff on the day of the dinner. The chef’s punk rock mood could not be missed. 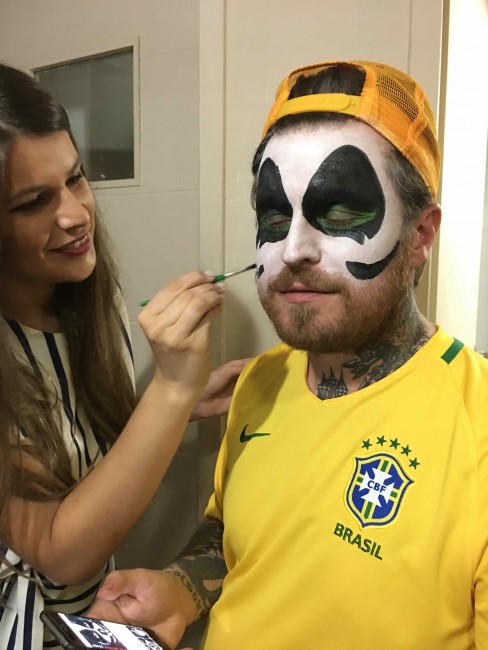 The dishes
Tiernan showed a little of the cuisine he practices in London, with the fusion of various cultures. On the day of dinner, he wore the shirt of the Brazilian football team, which he won from chef Eva dos Santos.
A representative of the purest avant-garde of international cuisine, Tiernan presented simple, authentic food with a fusion of cultures and flavors. A strong trend in Europe. Cheap ingredients used with lots of creativity and technique and strong flavors. Some love, others hate, he goes on without seeming to care. Simple as that. 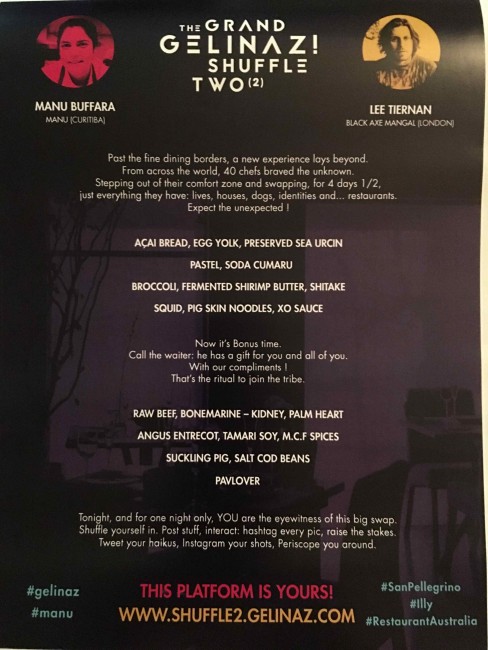 With the intention of teasing and also playing around, Tiernan entered the Manu hall with the dessert in the shape of a penis and breasts amid an explosion of red-heart confetti. In his restaurant in London the male sex organ graffiti on the floor may go unnoticed, but not here. Ice cream, cream, strawberry syrup and mango, the “Pavlover” was perfect and simple as the ones served at family lunches. Nothing casual, it was made by Vanessa “Petitfour” Lima, Manu’s house confiseur, in the style of the chef. One of the surprises of the night: pork-ear noodles and squid; the scare was on account of the very strong pepper. Certainly, if it were a little lighter the evaluation would be of a five-star dish, but it seems, the intention was to tease. According to the chef, at his house in London it is much stronger. The chef’s “pastel” stuffed with mutton was served with yellow lantern chili pepper and pitanga to measure, infused with lemon drop chili and vinegar, accompanied by cumaru soda, would win any contest. He loved the pastel served at our fairs, but he thought it had little filling, and rightly so. 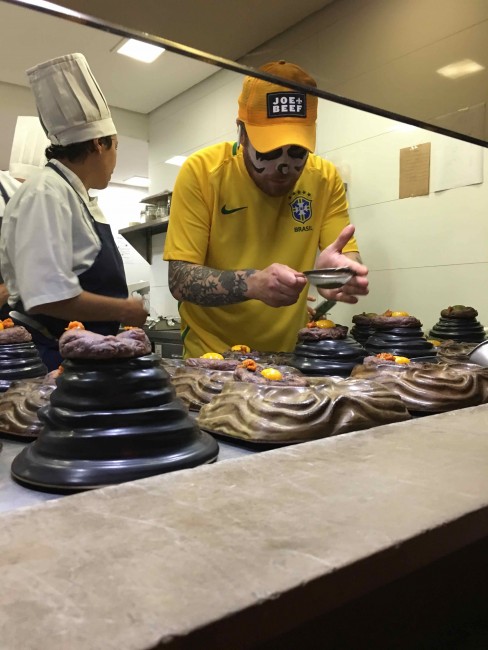 The touch of pickled hedgehogs on açaí bread is unforgettable, I would just put aside the glitter on top. The mixture of tradition and boldness is the signature of the chef.

The entrecot sealed in soy sauce with tamarind was hors-concours , accompanied by salad with tahine sauce, pickles and garlic mayonnaise. Spicy, strongly delicious. 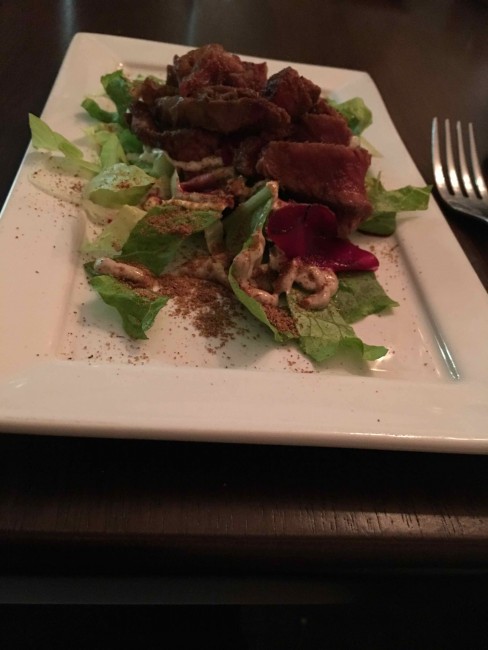 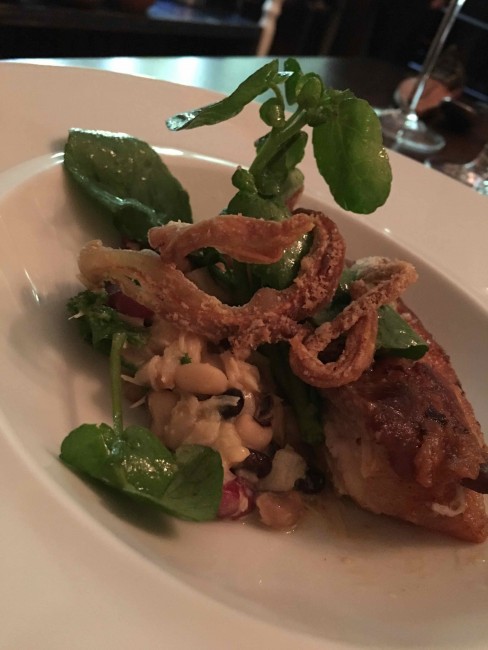 1. One more achievement
2. Manu gave projection to Curitiba in the vanguard scenario of international cuisine
3. Lee Tiernan with his hand in the dough literally making the bread prepared with açaí
4. Moments before dinner starts
5. In the traditional photo after the welcome barbecue: Manu’s family, restaurant staff, producers and chefs who would cook for the guest
6. In Palmeira, looking for local fruits
7. Separating what would be discarded to feed the animals of Casa da Videira
8. Making pizza in Witmarsun with Rosane Radecki and René Seifert Jr.
9. Chef Gabriela Carvalho, along with Tiernan, also hosted the London chef
10. Architect and blogger Gabrielle Mahamud in action: special participation
11. The Kiss band was the inspiration
12. Event menu: creative and audacious
13. Apotheosis: stars and hearts for the entrance of the “Pavlover”
14. Pig-ear noodles: creativity
15. A cake with lots of filling and peppered Brazilian cherry to the measure
16. Hedgehog pickle on acai bread: unusual flavors and a delicious combination
17. Shitake and broccoli gained reinforcement and flavor with fermented shrimp butter. The dish that most reminded the style of chef Manu Buffara.
18. A dish to be copied
19. The marrow and palmetto fought for attention: we have two winners
20. The pork of Palmeira, next to the cod with beans and watercress, went up to the level of haute cuisine. Too good.